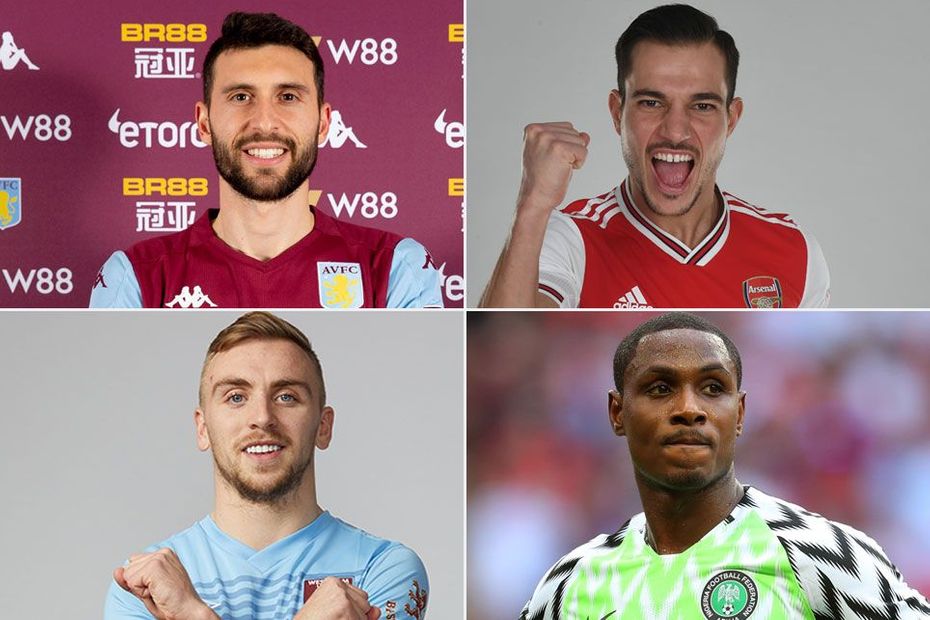 The January 2020 transfer window has closed. Here is everything you need to know about the day's deals.

00:30 Those are all the big deals announced for this January's transfer window. Now we get back to the football, with 10 matches over the weekend, starting with Leicester City v Chelsea from 12:30 GMT on Saturday.

00:03 Odion Ighalo has returned to the Premier League with Manchester United, arriving on loan from Chinese club Shanghai Shenhua.

The 30-year-old Nigerian striker made 55 Premier League appearances for Watford between August 2015 and January 2017, scoring 16 goals and adding four assists.

Man Utd manager Ole Gunnar Solskjaer said: Odion is an experienced player. He will come in and give us an option of a different type of centre-forward for the short spell he’s staying with us.

23:50 No deal sheets were submitted before the 23:00 GMT transfer deadline.

Manager David Moyes said: "I think he could be a big success.

"When you score goals like he does, and in the numbers he does, in the Championship, it will give you a great chance of scoring goals in the Premier League."

23:05 The Premier League transfer window is closed. However, further transfers could still transpire if clubs submitted deal sheets before the 23:00 GMT deadline.

22:59 Aston Villa have signed striker Borja Baston, agreeing a deal with the free agent after his departure from Swansea City. The 27-year-old scored six goals in 20 Championship matches with the Swans in the first half of this season.

The 29-year-old started 34 of Wolves' Premier League matches last season and has made 11 top-flight appearances this term.

Bennett said: "The club is moving in a forward direction and it's really good to be part of it."

21:48 Sheffield United midfielder Mark Duffy has been recalled from his spell with Stoke City and is now joining Dutch club ADO Den Haag on loan.

20:15 Maya Yoshida has left Southampton, moving to Sampdoria on loan.

The 31-year-old defender, whose contract at St Mary's expires in the summer, made 154 Premier League appearances for Saints.

Blades manager Chris Wilder said: "He is young, talented and one that we've had our eye on for quite a while.

"He's an international who has played at the top level and cost a lot of money when moving across Europe."

"There was an opportunity for us to take Panos short term with the view to making that permanent. We're delighted to get him, captain of Olympiacos, Greek national team, he has a great CV."

The gaffer was delighted to get Panos Retsos over the line 🤝 pic.twitter.com/qXTn7IPEWp

19:45 Teenage talent Luke Matheson has joined Wolverhampton Wanderers from Rochdale and is returning to the League One club on loan.

The 17-year-old defender scored at Manchester United in the EFL Cup in September.

Get to know Tariq Lamptey

19:07 Watford have announced they have terminated the contract of Sebastian Prodl by mutual consent after 77 Premier League appearances.

See: Palace trio head out on loan for remainder of the season

See: Ashley-Seal heads to League One

17:22 There is an out from Manchester City, with wing-back Angelino joining Red Bull Leipzig on loan.

17:00 Brighton & Hove Albion have announced that Jurgen Locadia has been recalled from his loan at Hoffenheim.

1625: Sticking with Chelsea, head coach Frank Lampard has given an update on striker Olivier Giroud following speculation about his future.

"Olivier Giroud in this window has been incredible as a professional and as a man," Lampard told the club's official website. "He's been impeccable in that period and I've got huge respect for him for that and as a player. Will he leave? No."

16:03 And there's another departure at Chelsea, with Academy midfielder Clinton Mola leaving for Stuttgart on a permanent deal.

15:10 Newcastle United have announced that Ki Sung-yueng has left by mutual consent.

The 31-year-old joined from Swansea City in July 2018, making 21 Premier League appearances. "It was great honour and happiness of mine to play for such a great club as Newcastle United," Ki told the club's official website.

13:41 England Under-20 goalkeeper Nathan Bishop says it is a "dream come true" after he agreed a move to Manchester United. The 20-year-old has joined from Southend United on a two-and-a-half-year deal.

13:38 Zivkovic says he is hoping he will be able to seal a permanent move to Bramall Lane.

13:20 Here's more on Sheffield United's signing of Richairo Zivkovic. The former Dutch Under-21 forward has played for Groningen and Ajax before moving to China in 2019, where he scored 12 goals in 17 matches.

"He will give us genuine pace at the top of the pitch," manager Chris Wilder told the club's official website. "We're learning all the time this season but pace in the Premier League is key and Richairo is someone we think can kick us on."

13:12 Meanwhile at Wolverhampton Wanderers, goalkeeper Harry Burgoyne has left the club after 11 years to join Shrewsbury Town on a permanent deal.

13:06 Sheffield United have made their fourth signing of the month with the arrival of striker Richairo Zivkovic from Chinese club Changchun Yatai.

The 23-year-old joins on loan until the end of the season, with the Blades having the option of making the move permanent in the summer.

12:50 There have been a few more transfers involving youth players. West Ham United winger Dan Kemp is now at Stevenage Borough, Sheffield United goalkeeper Marcus Dewhurst has joined Carlisle United and Chelsea midfielder George McEachran has signed for Dutch side SC Cambuur. All three are loan signings until the end of the season.

12:13 The incoming players to the Premier League this month can have a big impact on the plans of Fantasy Premier League managers. Four new additions have just been added to the game, including Bruno Fernandes and Daniel Podence, and have been given a price. Will they be in your teams?

11:02 Cedric Soares has conducted his first interview in the red of Arsenal, saying: "To be able to reach this point is unbelievable."

10:29 Arsenal have made their second signing of the January window as Cedric Soares moves to Emirates Stadium on loan until the summer.

The 28-year-old has made 120 Premier League appearances since joining Southampton in 2015.

See: Cedric Soares to join us on loan

09:46 Everton Premier League 2 defender Lewis Gibson has signed a new contract with the Toffees before moving to Fleetwood Town on loan for the rest of the season. Centre-back Morgan Feeney has moved to Tranmere Rovers, also on loan.

09:32 Norwich City have announced the signing of left-back Sam McCallum from Coventry City. The 19-year-old has been loaned back to the Sky Blues for the rest of the campaign.

09:19 And Manchester United confirmed that they had completed the signing of Bruno Fernandes from Sporting Lisbon on a five-and-a-half year contract.

09:15 Good morning and welcome to our Transfer Deadline Day updates page. A reminder that there were a flurry of transfers on Thursday evening.

Clubs have until 23:00 GMT, or 01:00 of 1 February if they submit a deal sheet, to recruit and register new players for the remainder of the 2019/20 Premier League season.

Note that players will need to be registered before 12:00 on 31 January to be eligible for Matchweek 25's matches, starting on Saturday 1 February.