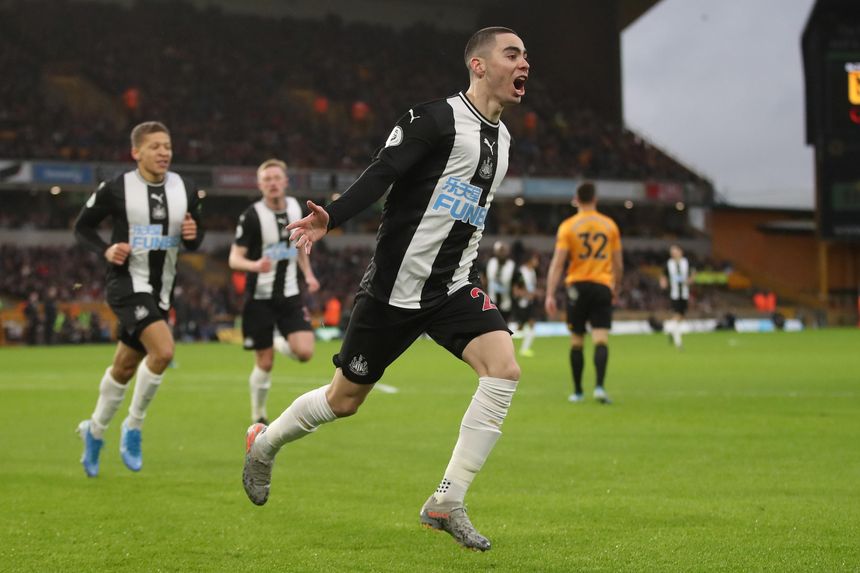 With a weight lifted from his shoulders, Almiron is performing with great confidence, posing a threat whenever he breaks into the box.

Chelsea head to St James' Park on Saturday evening and must track the Paraguayan closely if they are to record an eighth away win of 2019/20.

Almiron's improved form has coincided with a positional switch, with the 25-year-old moving from a role on the right of midfield to the left.

Head coach Steve Bruce responded to Allan Saint-Maximin's injury by making the tactical adjustment just before Christmas, and Almiron has not looked back.

Whether operating as a winger or as one of three central midfielders, he has been both efficient and effective, and his end product has improved markedly.

Indeed, he has scored with his last two shots on target in the Premier League.

Statistically, the changes to his game may not look dramatic, but the former Major League Soccer star is displaying more attacking ambition with every passing week.

Until recently Almiron was viewed as a busy, hardworking wide man who carried the ball well on counter-attacks.

But by selecting the right moments to push himself into the danger zone, he is quickly altering perceptions about his style.

He has now scored four goals from seven starts in all competitions.

His strikes against Crystal Palace and Wolverhampton Wanderers, one with each foot, were clinical finishes that arrived on the back of a burst into the penalty area.

Should his scoring form continue the South American will soon establish himself as a goalscoring box-to-box midfielder.

Moving Almiron inside and using him as part of a three-man central unit in a 3-5-2 system is a smart move by Bruce.

The experienced head coach has recognised that his diminutive star is better at winning the ball than he is creating chances.

This season Almiron has contributed just 12 key passes and one assist.

And in open play he averages less than one attempted cross per match.

Those are low returns for a winger or attacking midfielder, but Almiron offers plenty when it comes to securing possession.

Always hunting down the ball, Almiron wins more tackles than any other Newcastle player, and he also ranks highly on the list for interceptions.

Playing in a team who use turnovers as the launch for many of their attacks, it is little wonder Bruce kept faith with Almiron even when he was not scoring.

He is one of the most effective attacking midfielders in the division when it comes to defending from the front.

Providing Almiron continues to work this hard off the ball and contribute goals more consistently, he will remain a crucial player for Newcastle.