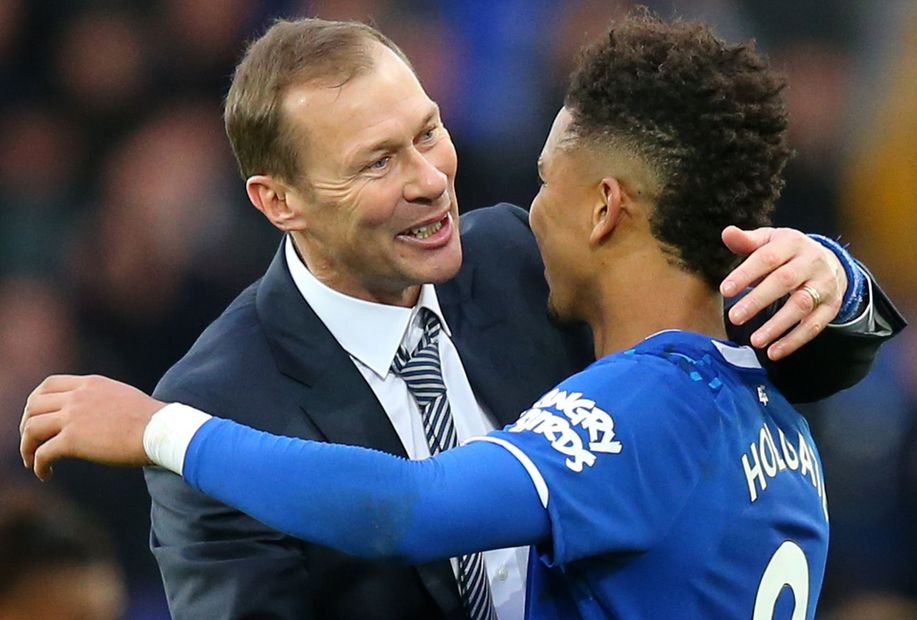 Expect to see Everton adapt a direct and aggressive approach within a 4-4-2 formation at Manchester United on Sunday.

Their interim head coach Duncan Ferguson asked his players to move the ball from back to front quickly against Chelsea last time out.

And the Scot's tactical switch paid off as Everton ended a run of three successive defeats with a 3-1 home win.

Key to that success was the solid central-defensive pairing of Mason Holgate and Michael Keane, who got the ball forward at the earliest opportunity, making 11 and 17 long passes respectively.

It was such a noticeable feature of Everton's play that 'keeper Jordan Pickford did not roll or throw the ball out once, instead opting to go long with all 35 of his passes.

This type of percentage game, where the Everton front men had to win their battles inside the opposition half, was a ploy that unsettled Chelsea.

The young Chelsea defence struggled to handle the physicality of strikers Richarlison and Dominic Calvert-Lewin, who both scored.

Man Utd manager Ole Gunnar Solskjaer will have to ensure his defence are ready for a similar examination at Old Trafford.

Everton's robust style will be the opposite of what United encountered in their 2-1 win at Manchester City last Sunday.

Recording season-best stats of 36 tackles and 225 passes, of which 29 per cent were long, Ferguson's rejuvenated side performed with simplicity and force against Chelsea.

Everton can take further encouragement that three of United's poorest displays of the season – defeats by Crystal Palace and Newcastle United and a draw at home to Aston Villa – featured tactical similarities to theirs.

Provided that Everton have the same intensity levels and defensive organisation, their new style may not be to United's taste.

One of Sunday's key battles could be between right-back Djibril Sidibe and Man Utd's Marcus Rashford.

How he fares in his duel with the in-form Rashford could determine Everton's fate.

Rashford will attempt to keep Sidibe occupied inside the opposition half for most of this contest, but when the Frenchman gets forward United must be on their guard.

Sidibe is by far the most accurate of all Everton's wide men when producing crosses from open play.

Most open-play crosses by Everton

It will be fascinating to see whether Rashford is tasked with tracking Sidibe all the way, or whether left-back Luke Shaw will assume responsibility for closing him down.

There could be an equally fascinating contest on the opposite flank, where Daniel James comes up against Lucas Digne.

If Solskjaer's men do not block enough crosses, Everton could capitalise, using their aerial presence inside the 18-yard box.

Everton have scored 10 headed goals this season, second only to Liverpool. Richarlison has claimed three in 2019/20 with Calvert-Lewin scoring twice with his head.

It will be a big ask of Everton, but they do have the game to trouble Man Utd.