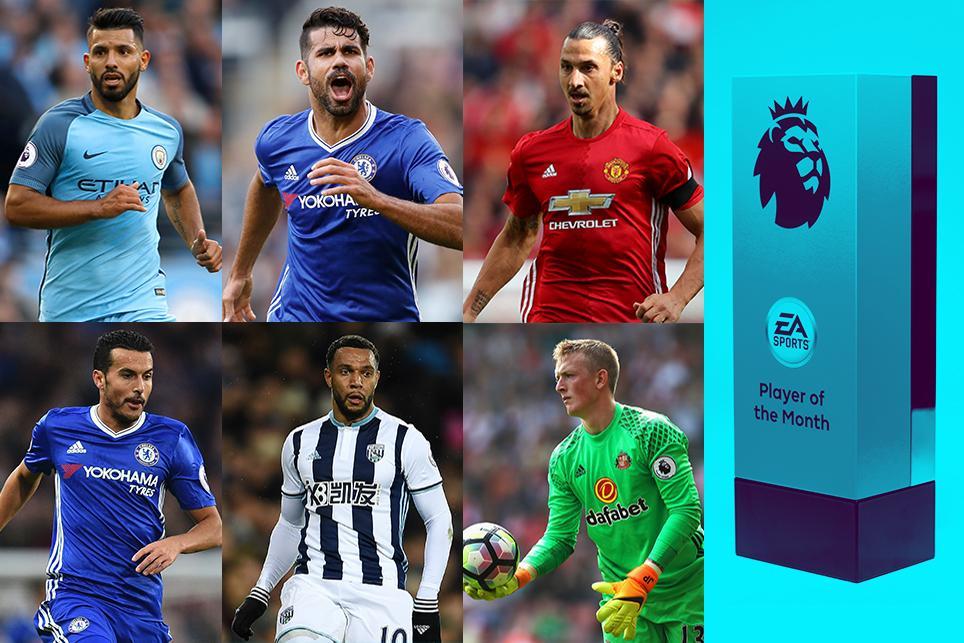 After impressive performances last month, Matt Phillips of West Bromwich Albion and Sunderland's Jordan Pickford have been included on the players the public can vote for in the poll for the EA Sports Player of the Month for November.

With Chelsea and Manchester City having another productive month, the Premier League's leading scorers, Diego Costa and Sergio Aguero, are also in the running, while Pedro, also of Chelsea, and Manchester United's Zlatan Ibrahimovic complete the six-man shortlist for individual honours.

The vote will close at 23.59 BST on Monday, 5 December and the winner will be announced on Friday, 9 December.

Sergio Aguero (Man City) P3 W2 D1 L0 Goals Scored: 3 Assists: 0
The striker struck three goals, including two at Burnley that turned the match round. He is the joint-leading scorer in the league.

Diego Costa (Chelsea) P3 W3 D0 L0 GS2 A2
Costa's two goals and two assists helped Chelsea continue their unbeaten run. After a goal against Everton, Costa broke a stubborn Middlesbrough defence with the only goal at the Riverside. His run and cross also created Chelsea's winner against Tottenham Hotspur.

Pedro (Chelsea) P3 W3 D0 L0 GS2 A2
Revitalised in Antonio Conte's new formation, Pedro was one of their key creators and scorers last month, scoring twice, including the crucial goal before half-time that started the fightback against Tottenham Hotspur.

Matt Phillips (West Bromwich Albion) P3 W2 D1 L0 GS2 A3
The West Brom midfielder had a stellar month, scoring twice and setting up three other goals. He scored and assisted in each of the wins against Leicester City and Burnley and provided the assist for the goal at Hull City.

Jordan Pickford (Sunderland) P3 W2 D0 L1 CS1 S16
The Sunderland goalkeeper's saves at AFC Bournemouth were a key factor in securing the club's first Premier League win of the season and he repeated the heroics the next matchweek in the home win against Hull.