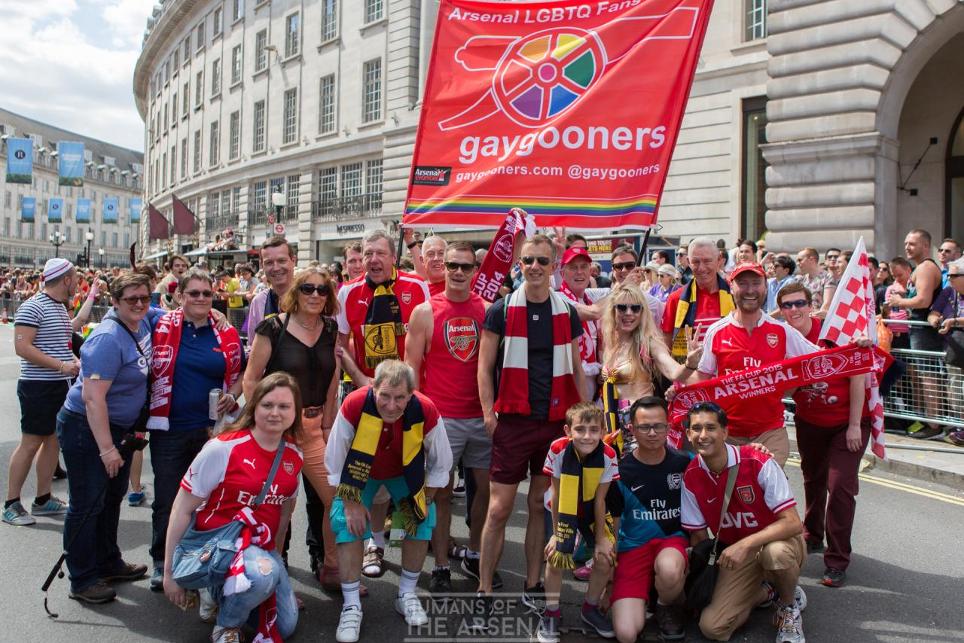 How GayGooners, with the help of Arsenal FC, have become the largest LGBTQ fan group of its kind in English football

This weekend, Premier League clubs are showing their support for Stonewall's Rainbow Laces campaign at their matches.

Here, GayGooners chair Dave Raval describes the work that his group and Arsenal FC carry out to promote inclusion.

Formed in February 2013, the GayGooners set out to provide a social group for LGBTQ Arsenal fans and their friends to meet up in a safe and welcoming place, and to campaign against homophobia and transphobia in football.

Arsenal Football Club provides great support, under their "Arsenal for Everyone" initiative, and the results have been impressive.

Fast-forward three seasons, and the group is the largest of its kind in English football, with hundreds of members both home and abroad.

Meeting before home games near to Emirates Stadium as well as watching away games together, the GayGooners also represents the club at the annual London Pride parade and hosts many social events.

GayGooners is also a member of Pride in Football, the group of LGBTQ fan groups that fights for equality and supports fans of other teams to set up their own groups.

"Having worked closely with the campaign in previous years, we welcome the return of the Rainbow Laces weekend, and are delighted that the Premier League has officially endorsed it this season," said Raval.

"There are many many LGBTQ people in football, whether as players, fans, referees or administrators. But until recently, you wouldn't have known, as people didn't feel welcomed by football, so kept things secret.

"Events such as Rainbow Laces show that football is changing and provide both visibility of that, and support to LGBTQ people to 'come out' in football.

"One day, this will be a non-issue and no-one will care. But until then, it's necessary to be visible and to challenge prejudice. Football should be for everyone and we look forward to continuing to work with the Premier League to make it so."