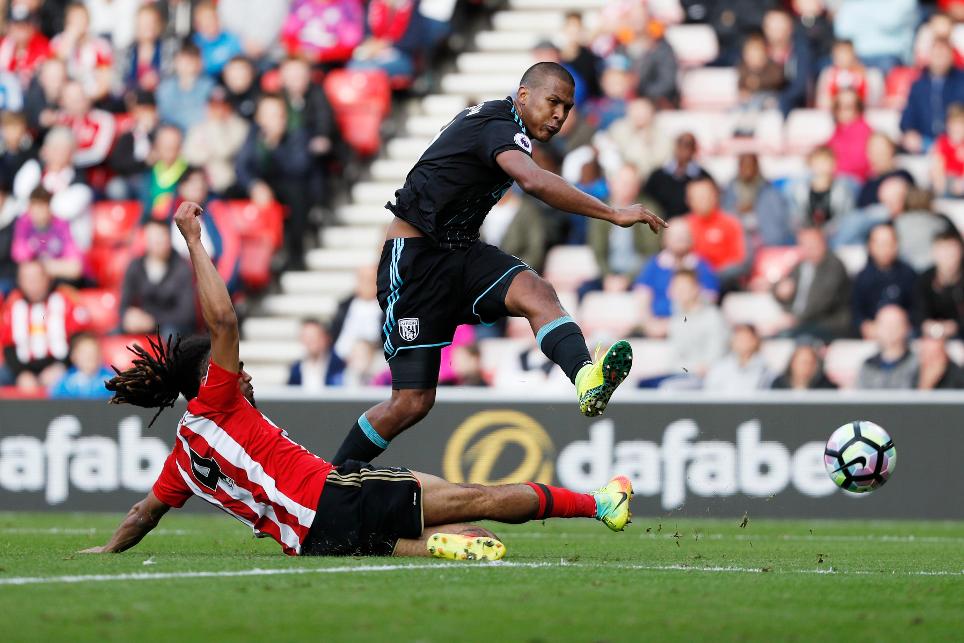 West Bromwich Albion have never tasted defeat at the King Power Stadium, winning on four of six visits to the home of the defending Premier League champions. In fact it is 22 years since Leicester City last beat the Baggies before their own fans.

Will that incredible run continue this Sunday? Ahead of their Matchweek 11 meeting, Adrian Clarke gives us the lowdown on what to expect from Albion.

Tony Pulis is regarded as a set-piece specialist for good reason. In all but one of the nine seasons he has coached in the Premier League, the 58-year-old's sides have scored a significantly larger proportion of goals from corners and free-kicks than the divisional average.

That is no fluke and it outlines where his priorities lie.

So far this season, six of their 10 goals have stemmed from set-plays. So what is his formula?

It sounds simplistic but Pulis selects more tall players than most PL managers. Last weekend for example, James McLean, 180cm (5ft 9in), was the only West Bromwich Albion starter under 183cm (6ft) in height. Half a dozen of his outfield players were in excess of 188cm (6ft 2in).

With the majority of opposition teams unable to match that range of aerial prowess, the Baggies hold a distinct advantage.

Pulis does not over-complicate matters either. While there are slight variations, his basic premise is to have six men attacking the ball on the edge of the six-yard box. Usually three players occupy that zone prior to the kick being taken, with the others running into the area from around the penalty spot.

The focus is on whipping fast-paced crosses into that sector and you can tell that plenty of time is spent honing those situations on the training ground.

Five of West Brom's six dead-ball goals in 2016/17 have stemmed from left-wing corners (a particular forte) and by sheer weight of numbers, from direct headers or second ball knockdowns, they have been too powerful to handle.

Where possible, Leicester's players would be advised to try to concede throw-ins instead of corners this weekend.

While they have tightened up since being defeated 4-1 at Manchester United in September, the champions still hold the joint-worst record (five goals) at concessions from corners.

Their weakness happens to play into the hands of West Brom's greatest strength.

Tactically speaking, Albion are likely to sit deep, keep their shape, and do their utmost to deny the likes of Jamie Vardy and Riyad Mahrez space inside the final third.

Conceding only five goals in as many away matches, as well as limiting home teams to only 13.2 shots per match (the ninth-best record in the PL) they have been organised and largely unflustered on the road this season.

However, with the Foxes' home form strong, West Brom will still need a big performance from goalkeeper Ben Foster.

Fortunately for them, since returning from a knee injury that kept him out for the bulk of 2015/16, he has been in excellent form.

The 33-year-old is not the type to come out and punch the ball clear, he has not done it once this season, but his general goalkeeping standards have been superb, and among the best in English football's top flight.

As well as making a string of athletic saves, Foster has been flawless when it comes to making aerial claims, and his distribution is a big plus too. No other PL keeper has delivered as many accurate long balls as he has since August.

In their quest to preserve an amazing unbeaten record at the King Power, Albion's on-song stopper will be instrumental.

Since drawing 2-2 against Claudio Ranieri's side in the corresponding fixture last season, West Brom have scored more than a single goal in only one of 20 Premier League matches, the 4-2 win at home to West Ham United in September.

That is a very limited goal output, so when Pulis said recently, "What we've got to make sure we do at Leicester is have a go," it is not something his players have been especially good at of late.

Part of the problem lies in their disappointing ball retention.

With a 66.6% accuracy rate, Albion are statistically the Premier League's worst passers away from home, and this impacts upon their ability to create chances. On their travels, the Baggies have only scored once from open play.

Remarkably, their keeper is West Brom's second most prolific passer this season (317) and in their last three PL contests Foster has made the most passes of anyone inside the opposition half.

That is far from ideal, especially when you consider the back four in front of him also like to hit long balls as a matter of course.

For the Baggies' creativity to improve, it is vital that they try to play through the lines more often, giving their attack-minded players better-quality service.

Striking the right balance is something Pulis must consider. While he does not want to weaken the side aerially or in a physical sense, his current XI lacks natural playmakers.

The club's most accurate passers, Sam Field (88.6%), Jonathan Leko (85.7%) and James Morrison (82.5%), have not been in the starting XI of late, and two of Albion's best three chance-makers, Phillips (12 key passes) and Gardner (eight) have also been out of favour.

With Claudio Yacob back from suspension this weekend, it will be fascinating to see who gets the nod in midfield. The selection will provide clues as to how Pulis plans to approach the match tactically.

The player Leicester will fear most is Salomon Rondon.

The Venezuelan broke the deadlock against West Ham and teed up the equally in-form Nacer Chadli on a lightning quick counter-attack later in the same match.

Up at Sunderland, Chadli also stroked home a calm finish having been put in the clear by Phillips, but the Belgian, who has the ability to produce moments of telling class, is out of this contest after undergoing a minor knee injury. He will be a big miss for Albion.

Rondon is a vastly underrated centre-forward. Forced to feed off scraps at times, the striker has pace, power, a good touch and the talent to score goals with both head and feet.

Providing he gets the right kind of service, the 27-year-old is capable of causing any team in the division problems.

To extract the best from their South American, the Baggies must be less passive, and deliver the midfield support he craves.

If West Brom do decide to "have a go" in the way their manager intends, he could prove a real thorn in Leicester's side.