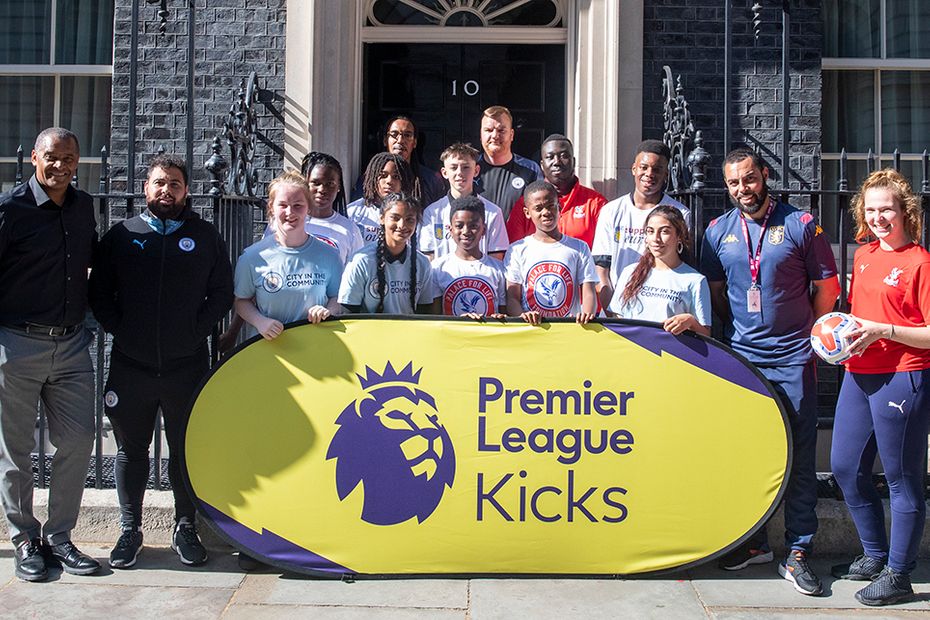 It is a road known across the world as a place of vast political significance. But earlier this week Number 10 Downing Street was turned into a football pitch to highlight the impact of the Premier League Kicks programme.

Participants from Aston Villa, Crystal Palace and Manchester City played football between the cones at a special event at the Prime Minister's official residence.

And after the kickabout, the young people went through the famous black Number 10 door and met Prime Minister Theresa May at a reception which recognised the participants, role models and volunteers who work hard to reduce youth violence in local communities.

One of those role models is Angel O'Dwyer, who started as a participant with Crystal Palace's Palace For Life Foundation in 2015 but now helps deliver PL Kicks as a Community Development Officer.

"This is an opportunity that not many people can say they have experienced," she said. "It's so exciting and the participants have said they will go back to their friends and tell them about coming to such an amazing place.

"Play for the enjoyment. Stay fit, stay healthy, stay out of trouble" - @Mark_Bright

"It's so important that PL Kicks keeps running in all the different communities to allow young people like myself to progress through the ranks.

"I've got so many memories and so many skills that are transferable and no-one can take them away from me."

Thoiba represented Man City's City in the Community and at the reception she was able to tell invited guests such as Harry Redknapp and Andy Burnham, the Mayor of Manchester, how PL Kicks has helped her.

"I was just an average girl playing football in my back garden and it wasn't much outside of that," she said.

"I was usually in my bubble, I didn't like to talk to many people. But the PL Kicks sessions helped me to express myself and I got to know so many people in the community.

"I like how it doesn't matter what colour you are, what gender you are. You just play and you enjoy, and I loved that."

PL Kicks has been running since 2006 and reaches 75,000 participants a year from high-need areas, using football to inspire young people to develop their potential and build stronger, safer communities.

"It's essential to have this stuff going on," said Ken Campbell, Aston Villa Foundation inclusion coach. "I didn't have Kicks when I was young and if I did, I would have made a lot of different decisions in my life that would have got me to where I am today sooner.

"The participants are able to play football and meet people from another are. It breaks down barriers."