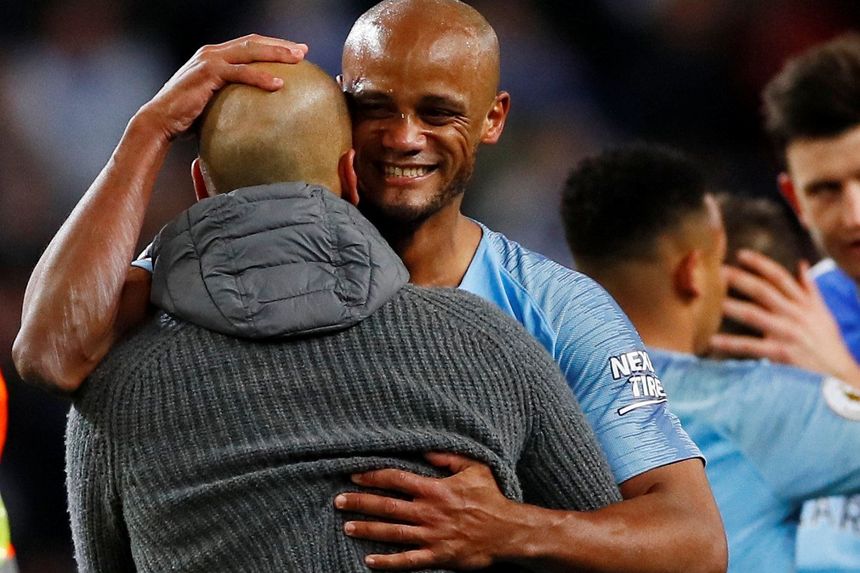 City edge closer to title after Kompany stunner External Link
Kompany: I ignored orders not to shoot!
History shows being top is vital ahead of finale

He scored a potentially title-deciding goal for Manchester City on Monday night, but it is Vincent Kompany's resilience throughout his career that has struck Alan Shearer as much as his impressive, long-range goal.

"There aren't many players like him, with that attitude, that hunger," said Shearer, the Premier League Champion, who has included the City captain in his Team of the Week.

"He's had injuries, he's been down on the floor and has had to pick himself up and go again. He's done that so, so many times."

Introducing @alanshearer's Team of the Week - agree with his choices? pic.twitter.com/BoCXLqy8y3

What a debut for the 19-year-old! Man of the match for a string of saves as he kept a clean sheet against Spurs.

There aren't many players as determined as him, with that attitude, that hunger.

He's had injuries, he's been down on the floor and had to pick himself up and go again. He's done that so, so many times.

The defender was not deterred playing in an unfamiliar midfield role and deserved to score his stoppage-time winner.

The flying wing-back is absolutely integral to how Wolves play, setting up the winning goal with a smart cross for Leander Dendoncker.

The 31-year-old is getting stronger as the season goes on.

He bossed the midfield against Southampton and his fine through-ball set up Marko Arnautovic's opening goal.

The midfielder keeps making runs into the box and got his reward with a second Premier League goal. He has stepped up to help Wolves seal seventh place, and potentially a place in Europe.

A stunning display from the winger. Townsend was the best player on the pitch and added to his assist for Wilfried Zaha with a superb solo goal of his own.

A dose of Belgian brilliance. After setting up two goals he was unlucky not to crown a dominant display with a strike himself.

How close did he come to derailing Liverpool's title bid? Newcastle's No 9 gave Virgil van Dijk a torrid time to go into double figures in a season for the first time.

The Austrian looks a man reborn. After assisting the winner at Spurs last week he went better this time with a brilliant brace.

Klopp's substitutes came to the party to keep Liverpool in the title race. Xherdan Shaqiri crossed for Divock Origi to head in what could yet be a vital goal for the Reds.