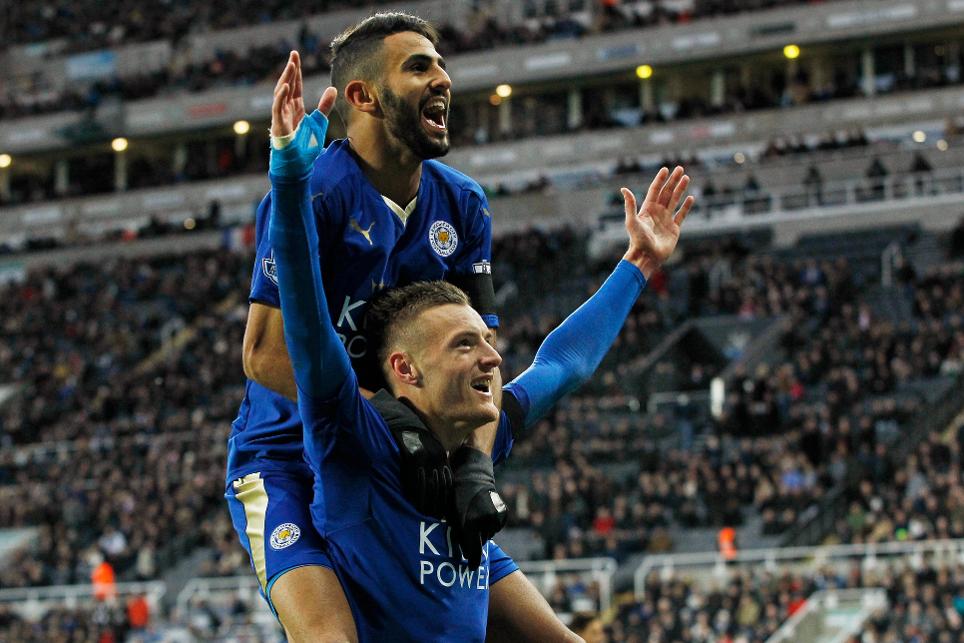 Ahead of Chelsea match, Adrian Clarke analyses how Leicester pair have struggled to replicate 2015/16 chemistry

Ruling it in External Link

Suffering three straight defeats on the road, reigning champions Leicester City are searching for their first away point of 2016/17 as they visit Chelsea in Saturday's early kick-off. Adrian Clarke analyses where the match could be decided.

In 2015/16 Jamie Vardy scored twice as many goals as Diego Costa on the way to the Premier League Player of the Season award, but Chelsea's rampaging striker looks far more menacing at the moment.

The supply line to Leicester's star forward has not been as free-flowing of late.

Throughout 2015/16 we marvelled at the chemistry between Riyad Mahrez and Vardy. In recent weeks they have not gelled as well, with wisened opponents stifling them, denying them space more effectively.

As a consequence, Mahrez is only picking Vardy out with half as many passes per match as last season.

In their last two PL appearances together Mahrez failed to find Vardy with a single pass, and, in Leicester's three away fixtures this season he has done so only twice.

Vardy is also in the process of learning to play with a different strike partner.

While there is nothing to suggest he and Islam Slimani are not compatible, the 28-year-old summer signing is more of a traditional striker than Shinji Okazaki, whose unselfish industry often paved the way for the Foxes No 9 to plunder his goals.

Of the two, it is Slimani who is benefitting most from the fledgling combination. Vardy has created two chances for the Algerian, including a goal assist, while the former Porto forward has picked out his fellow striker with only five passes in return.

For a mixture of reasons Vardy is not getting as many gilt-edged opportunities in front of goal.

As an attacking force in general, Claudio Ranieri's men are finding it a struggle.

With their approach under the Italian no longer a secret, opponents are adapting their tactical approach.

Closer man-marking, for example, has affected the Foxes' successful dribbles count, which is down from 11.32 a match to 6.86.

Teams are also intent on limiting the space they leave in behind for Vardy and Co to exploit.

Frustrated by this, Ranieri’s men have been resorting to many desperate long shots. No Premier League team are taking on a higher percentage of efforts from distance than Leicester in 2016/17, a far cry from last term.

Where Leicester are shooting from

Costa on the up

Costa, by contrast, is enjoying a fine resurgence with Chelsea.

Channeling his aggression in the correct manner, the Spaniard's appetite for destroying defences appears as high as it was when he joined Chelsea in 2014.

He has improved on last season’s performances in almost every aspect, especially his finishing.

Of the two front men on show at Stamford Bridge, the Spaniard’s form is markedly better.

When the champions sold N'Golo Kante to Chelsea last summer, they knew it might affect the quality of their work off the ball. That fear has been well founded.

Gliding around the midfield in tandem with Danny Drinkwater, Kante's ball-retrieval skills were in a league of their own, laying the foundation for so many Leicester victories. His presence made it feel as if they had three central midfielders, not two.

There has been no shortage of effort on Daniel Amartey’s part – covering only 200 metres less per match on average than Kante - but the Ghanaian does not yet seem to have the same sense for danger and breaking up play and is spending a lot of his time chasing.

The stats in the table above tell their own story and, even though Drinkwater has taken on a more aggressive role, upping his own tackle-count to more than four per match, Leicester are finding it tougher to turn over possession.

For a side who love to counter-attack this has been a major problem.

From back to front there has not been the same compactness. Placed under extra pressure, Wes Morgan and Robert Huth have both experienced uncomfortable moments, and with the defenders stretched, it has been easier for opponents to make runs in beyond them.

In August Ranieri claimed Kante was "irreplaceable". There is little doubt that when they are reunited this weekend, many Leicester City fans will be wishing he was still wearing their shade of blue.

With creativity an issue for Leicester at the moment, Ranieri may view set-pieces as their best avenue of success at Stamford Bridge.

His side have scored twice from dead balls this term: Morgan from a corner at home to Swansea City; Slimani from an expertly taken wide free-kick from Christian Fuchs when Burnley visited the King Power Stadium.

Although they have not fashioned too many chances from corners and wide free-kicks until recently (four and one respectively) the Foxes do boast a decent conversion rate.

Slimani in particular is a specialist in the air. All three of his goals for the club – two of which he scored in the PL – have come via headers, and he arrived in English football with a reputation for powering them past goalkeepers on a regular basis.

In Morgan, Slimani and Huth the Foxes boast three dangerous players Chelsea must try to contain in the air. This is a threat they may be nervous about, with Antonio Conte’s side looking ragged when shipping set-piece goals at home to West Ham United and Liverpool.

Fuchs is also a long-throw specialist. One of his flings came off a Southampton player to hit a post in Matchweek 7 and Marc Albrighton also scored from one of his throws against Club Brugge in the UEFA Champions League.

We do not see a plethora of long throws in the Premier League these days, but further success from Fuchs could bring them back into fashion.

This will be a classic 3-4-3 v 4-4-2 match-up and it will be fascinating to see which formation gets the upper hand.

As Chelsea are still acclimatising to their new shape, Leicester, who are well-versed in the machinations of their own style, could hold a slight advantage.

In a tactical sense the nightmare scenario for Ranieri will be if his full-backs get dragged inside by inverted wingers Eden Hazard and Willian, leaving the hosts' wing-backs free to isolate his wide midfielders on the flanks.

To avoid this happening, excellent communication and awareness will be needed from the Foxes' central defenders and midfielders. They must stem the service into that pair when they float infield, so that the full-backs are not pulled out of position.

There are interesting duels to watch all over the pitch: Drinkwater v Kante will be a tasty one-on-one; Mahrez may fancy his chances of pushing new recruit Marcos Alonso back towards his own goal, and at the other end it is imperative for Morgan and Huth to engage strongly with the in-form Costa.

The best approach may be to follow Arsenal’s recent lead by getting extra tight and super-physical with the Spaniard.

On current form Chelsea will start as favourites, but after heavy defeats at Liverpool and Manchester United, I expect last season's title-winners to put up far more stubborn resistance.

It is high time they rediscovered the togetherness that took them so far last season.