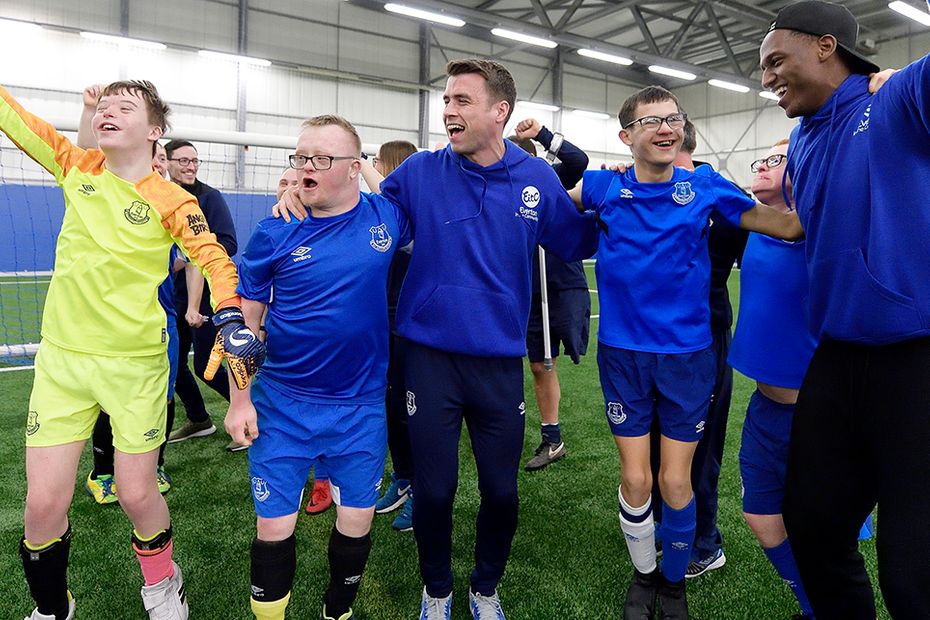 Find out how PL clubs have been marking a special day, including a unique training session at Everton's training ground

Premier League clubs celebrated World Down Syndrome Day on 21 March with a range of activities.

At Everton, 14 members of the Down's syndrome team from Everton in the Community, which has one of the largest disability programmes in the world, came to the club's USM Finch Farm training ground to join Seamus Coleman and Yerry Mina for an extra-special training session.

"These lads are an example," Coleman told the club's official website. "You see kids like this who maybe aren't as fortunate but you see them smiling every day and it's a lesson to us all – through good and bad to try to be as positive as you can be.

"I know quite a lot of them from doing various things with them in the past and I really enjoyed it; it always puts a smile on my face and, in turn, I think it puts a smile on their faces as well."

At Arsenal, midfielder Granit Xhaka has told of his friendship with young fan Julian.

The pair met at the end of 2015 when Julian was a mascot at Borussia Monchengladbach and walked out on to the pitch with Xhaka, who was captaining the side for the first time.

They have since developed a close bond and recently Julian was invited to Arsenal's training ground to spend time with the Gunners midfielder and the first-team squad ahead of their Premier League match with Southampton last month.

"I have a special connection with Julian," Xhaka said. "He's very special and he's always positive.

"There are many people who have everything and still complain but this boy knows exactly what he has and still has a positive outlook, a smile on his face."

Liverpool have highlighted the story of Reagan, a true Reds supporter despite her mum being a staunch Evertonian.

Reagan has been a part of the Respect 4 All programme for the last eight years and has made massive progress with the support of the Liverpool Foundation.

"To see her happy and enjoying things, that's what I get out of it," says mum Vicky Mcleod-Wilson. "She's been able to build-up her fitness, her skill-set and her confidence."

“Reagan, I’d say, is probably the heart and soul of the session.” ❤️

On #WorldDownSyndromeDay, we find out more about Reagan's brilliant story during a @LFCFoundation Respect 4 All session. 🙌 pic.twitter.com/MITjHvz3cC

Watford held a Down's Syndrome awareness day where players on their disability programme could show how the club have helped them.

The participants were also given tickets to watch Watford's match with Leicester City at Vicarage Road.

"Kids with any disability will find themselves excluded from sport at some point in their life," said Ben Simms, disability football project officer for Watford FC's Community Sports and Education Trust.

"Events like this are important because it shows that there is stuff out there if they want to get involved."