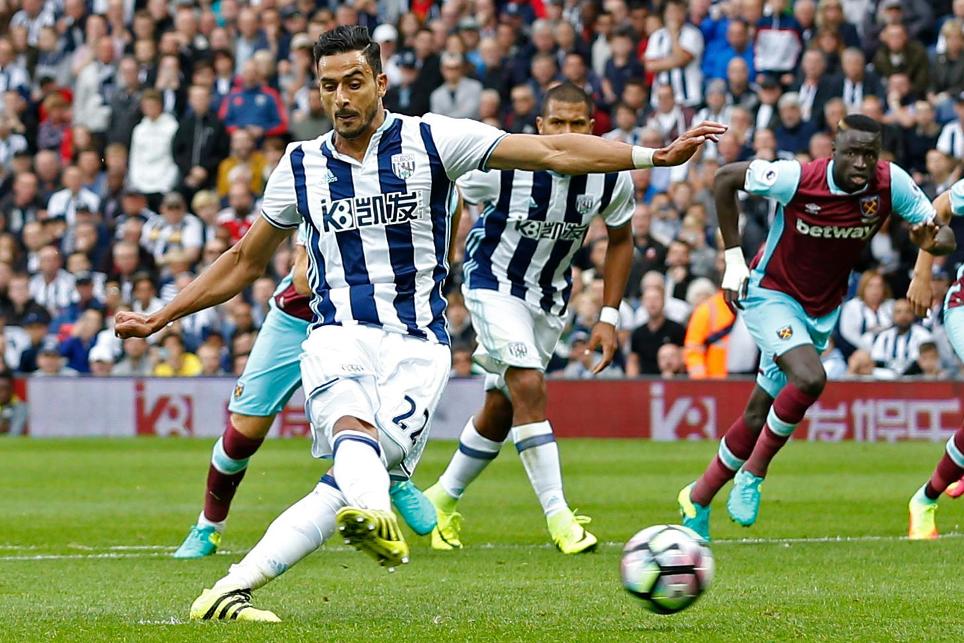 Chadli on the performance, the penalty and the fourth goal External Link

Both earned double-figure hauls, with De Bruyne now second in the FPL midfield standings after producing returns for the fourth successive Gameweek.

The Belgian is the most transferred in player ahead of Saturday’s 11.30am BST deadline, with more than 218,000 FPL managers buying him.

Andros Townsend (£6.3m) and Theo Walcott (£7.5m) each served up a goal and an assist apiece in their respective 4-1 wins over Stoke City and Hull City to claim their first Dream Team spots of 2016/17.

They were all overshadowed by Nacer Chadli (£6.4m) on his home debut for West Bromwich Albion. Handed a central supporting role by Tony Pulis, the summer signing produced two goals and two assists against West Ham United to collect a 21-point return, the biggest individual haul of the season.

Owned by only 1.2%, Chadli looks to have penalty duties for the Baggies and is expected to recover from a knock ahead of encounters with Stoke City and Sunderland, the league's bottom two.

Romelu Lukaku (£9.3m) earned a second successive Dream Team appearance thanks to a goal and an assist in Everton's 3-1 win over Middlesbrough.

Over the last two Gameweeks, the Everton striker, who is likely to recover from a toe injury for the trip to AFC Bournemouth, has produced 29 FPL points.

In his first Premier League appearance, Leicester City's club-record signing scored twice in a 3-0 victory over Burnley to earn 13-points.

At the back, Hull City's Eldin Jakupovic (£4.1m) continues to offer excellent value. Despite a 4-1 loss to Arsenal, the goalkeeper received seven points after denying Alexis Sanchez (£11.0m) from the penalty spot and is second in the goalkeeper standings on 23 points.

Leicester's Christian Fuchs (£5.4m) collected an assist, a clean sheet and maximum bonus points for a 12-point haul at home to Burnley.

Everton's Seamus Coleman (£5.4m) continued his impressive start under Ronald Koeman. The right-back grabbed a goal and two bonus points against Middlesbrough and has served up 16 points in two appearances this season.

Juan Zuniga (£4.4m) completes the starting XI thanks to a stunning cameo in Watford's 3-1 win over Manchester United. The defender emerged from the bench to claim a goal and an assist in just 12 minutes.