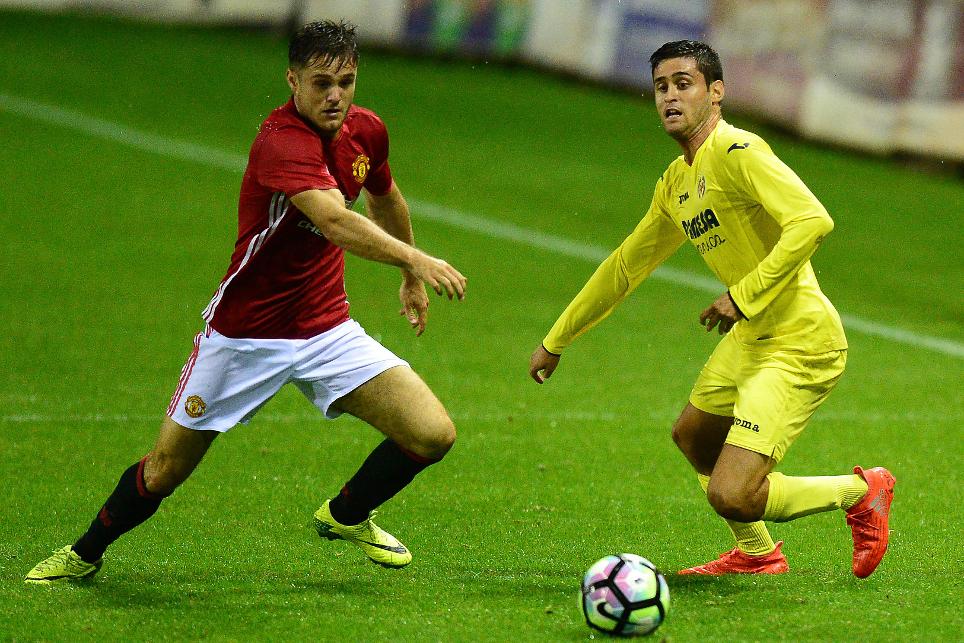 'If you keep it up, you have to be ready for your time'

The thunder roared, the lightning crackled and at 7pm on the dot the floodlights at Leigh Sports Village Stadium went off, just as Manchester United and Villarreal were about to kick off their Premier League International Cup campaigns.

Fortunately, the storm that forced the postponement of Manchester City's UEFA Champions League tie with Borussia Monchengladbach several miles east merely delayed the start of the match at Leigh by an hour.

Despite that triumph, Villarreal manager Paco Lopez called Warren Joyce's young team as "the strongest side that we've faced in all the competition" after Josh Harrop's 33rd-minute goal separated the sides at the final whistle.

The competition, launched by the Premier League in 2014, has been extended from 16 to 24 teams this season, 12 from England's top academies and 12 development squads from across the continent.

The plan is to give homegrown talent the chance to test themselves against the best young players from the Continent and adapt to the demands and different styles of domestic and European football, something they will have to cope with if they play UEFA Champions League or UEFA Europa League matches in their senior careers.

United's outfield players had an average age of about 19, whereas Villarreal's B-team players were mainly about 23, but had played 48 hours earlier before flying over to Manchester the day before the match.

Lopez is fully appreciative of the tournament's opportunities, notwithstanding his disappointment at the 1-0 defeat.

"It broadens the education of our players," he said. "They are playing against foreign players, with a different style, different game ideas, different things that we're not used to in Spain. So it's good for their education.

"For example, in tonight's game, Manchester was really physical. They took every edge of the game to the physical [limit] and this is really good for our players to get used to these type of situations."

United and Villarreal will also face Middlesbrough and Sparta Prague in Group B before eight group winners are joined by the best two runners-up for the quarter-finals.

The closest Villarreal came to equalising was when Mario Gonzalez struck a shot against the inside of Sam Johnstone's post but the Spaniards, with their ball mastery and fine movement off the ball, were not disheartened.

"Last season, we started the same way," midfielder Ramiro Guerra said. "We lost the first match, against Norwich [City], and today it's true that Manchester United were more intense than us, more physical than us, in better condition than we were, but we don't feel that we were less than them. We are the same.

"For us, it's a really beautiful competition to be a part of. We get the chance to play in fantastic venues [better] than in the professional category, second division B, that we are used to. It's great competition for us, educationally as players, and developing with all these different experiences."

The unforeseen challenge of coping with an hour's uncertainty before kick-off was a challenge in itself for the players.

"It's a really beautiful competition to be a part of; we get the chance to play in fantastic venues"

"All these type of situations are always educational," Paco said. "We have to learn from them."

Guerra added: "It's not a big deal. It is not something you can control. We were really excited before the game, we warm up, we cool down, we come back in… it's a kind of nuisance, but it's not an excuse for us."

Joyce, who counts six titles in the past seven years in charge of this team, including three titles in the four years of the Premier League Under-21 format, had prepared his players for such disruption.

"We set out sometimes in training to provoke them and look for reactions," the former Hull City and Royal Antwerp manager said. "Sometimes in pre-season, we've trained five times a day: come in at half-past eight, had a leg session, a football one, a gym one then we've trained at 5pm. So they're used to long days.

"They're used to it when they've got to go and rest and then switch on and go again. So it's good to have reference points back.

"Just like games tactically and technically, you can talk about experiences they've had in the past that might help them somewhere in the future.

"So even those long days, making them rest and go back in the dressing room and have a little bite to eat and come back out again and train four of five times in the same day might have helped us tonight."

This season English academy graduates are adapting to playing in the new Premier League 2, a league for Under-23 players building on from the Premier Under-21 League. Their games programme is also intensified this year by the opportunity to play in the English Football League Trophy, against first teams from League One and Two, as well as the Premier League Cup and this International Cup.

This combination offers a variety of experiences to intensify the challenge for young players looking to break into the Premier League, arguably the most competitive football league in the world, and Joyce is welcoming seeing how his team fares in their debut in the International Cup.

"Because there are B sides, you're playing against older players who are playing in league football every week," he said. "I watched Man City play Porto in the final a couple of years ago.

"Porto were a really good side and City played really well that night. I thought it was better, City winning [the 2014 trophy] against a Porto side full of men."

Peter Lansley, an FA Coach Mentor who reports for national newspapers, is a lecturer at the University of Derby in Football Journalism, the first dedicated undergraduate course in the country.