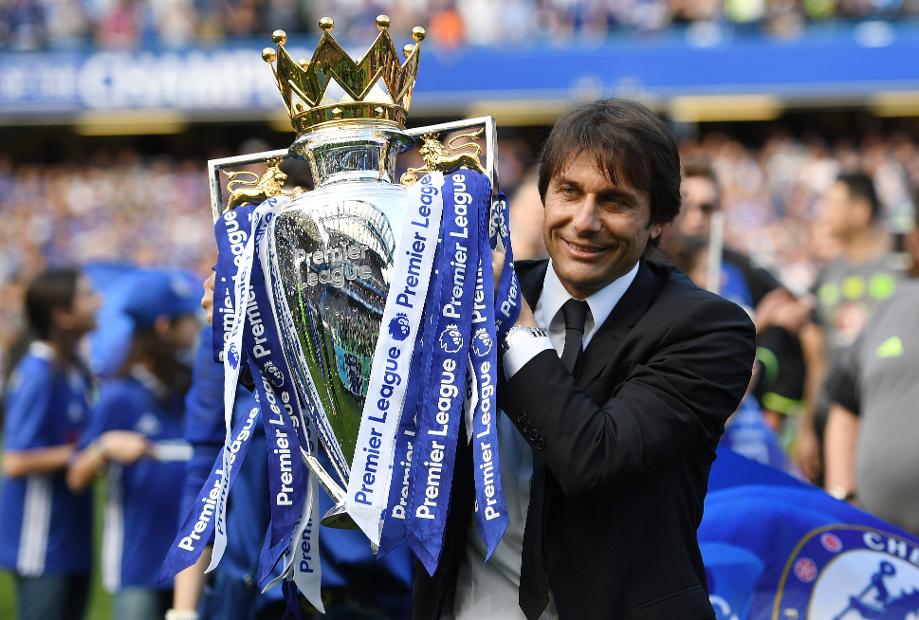 In the 25th season of the Premier League, Chelsea claimed their fifth title in a record-breaking campaign.

Led my new head coach Antonio Conte, who left his role as Italy coach in the summer, Chelsea claimed 30 wins to rack up 93 points.

Conte’s arrival caught the eye but it was the managerial appointments in Manchester which made the headlines in the summer of 2016, with Pep Guardiola taking over at Manchester City and former Chelsea manager Jose Mourinho appointed at Manchester United.

Guardiola got off to a blistering start, with a 2-1 victory at Old Trafford in a run of six successive victories at the start, before a 2-0 defeat by Tottenham Hotspur.

Leicester City’s defence of the PL title started badly, as they became the first champions to lose on the opening weekend, going down 2-1 at promoted Hull City.

Although they picked up a notable 4-2 victory against Man City, Leicester got sucked into a relegation battle before Craig Shakespeare replaced Claudio Ranieri as manager and steered them to 12th and the UEFA Champions League quarter-finals.

Chelsea’s champions form was not evident at the start of the campaign. Defeat to Liverpool and Arsenal prompted Conte to change to a 3-5-2 formation that transformed the side. After Arsenal, they earned 13 consecutive wins, then a joint-record in one PL season, to go top of the table at the end of 2017.

Jurgen Klopp’s Liverpool were second at the New Year, despite conceding a 3-1 lead to lose 4-3 at AFC Bournemouth in December.

Tottenham Hotspur ended Chelsea’s winning run, with a double from Dele Alli earning Mauricio Pochettino’s side a 2-0 win at White Hart Lane, but the Blues would not relinquish top spot for the rest of 2017/18.

The turn of the year also coincided with three extraordinary goals.

On Boxing Day Henrikh Mkhitaryan wowed the fans at Old Trafford with a scorpion kick from a cross by Zlatan Ibrahimovic, who impressed in his debut season in English football, including scoring the 25,000th Premier League goal.

But they were all usurped by an equally acrobatic effort from Liverpool’s Emre Can at Watford in May, which won the Carling Goal of the Season award.

Spurs’ 1-0 defeat at West Ham United on 5 May, allowed Chelsea the chance to clinch the title at West Bromwich Albion in their penultimate match. Michy Batshuayi’s goal did the job at The Hawthorns.

Antonio Conte won the Barclays Manager of the Season, while hard-running midfielder N’Golo Kante, an inspiration in Leicester’s 2015/16 triumph, won the EA SPORTS Player of the Season award after his summer move to Chelsea.

Spurs beat Manchester United to end their final season at White Hart Lane unbeaten, with 17 wins and two draws, before scoring 13 goals in back-to-back away wins as they finished runners-up for the second successive season.

Harry Kane scored seven of those goals, taking his tally up to 29 to win the Premier League Golden Boot for the second time in a row.

Guardiola led Man City to third while Klopp guided Liverpool back into the UEFA Champions League as they snatched fourth spot ahead of Arsenal, who missed out on qualifying for Europe’s elite competition for the first time since 1997.

At the bottom, Swansea City, who were at the foot of the table at Christmas, won 3-2 at Liverpool under new manager Paul Clement before finishing with a five-match unbeaten run to secure safety.

Sunderland’s 10-year stay in the Premier League came to an end as they finished bottom, while  Middlesbrough were unable to extend their first PL campaign since 2008/09.

Hull started the campaign with back-to-back victories with a squad depleted by injuries, but slid into the relegation zone and Mike Phelan was replaced as manager by Marco Silva in January.

Silva led an impressive revival with six wins in his first 14 matches, but a 4-0 defeat at Crystal Palace on the penultimate weekend of the season consigned Hull to a return to the Championship.