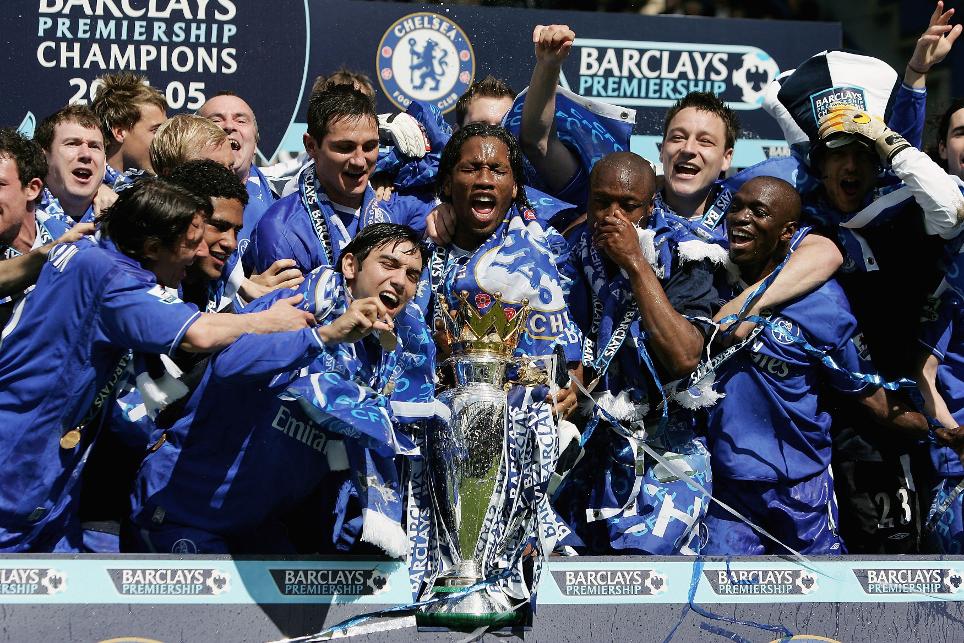 Twelve months on from the takeover of Russian billionaire Roman Abramovich, Chelsea appointed Jose Mourinho, who won the UEFA Champions League with Porto weeks earlier, as manager. In his first press conference, he announced himself as the "Special One" and immediately justified his words with a sensational debut season that ended the west Londoners' 50-year wait for the top-flight league title.

Petr Cech, Arjen Robben, Ricardo Carvalho and Didier Drogba were among a host of summer signings for Chelsea but it was Eidur Gudjohnsen who gave them the perfect start to the Premier League season in an opening-day win over Manchester United at Stamford Bridge.

Spaniard Rafael Benitez took over as Liverpool manager. Robin van Persie bolstered the squad of defending champions Arsenal, who were looking to build on a historic unbeaten 2003/04 Premier League season.

United's response to the Chelsea loss was to make 18-year-old Wayne Rooney the most expensive teenager in British football. Already an England international, the striker went on to score 11 goals in his first Premier League campaign at Old Trafford following his move from Everton, including a stunning volley against Newcastle United.

A 5-3 win on the second weekend of the season for Arsenal meant they broke Nottingham Forest's English record of 42 top-flight matches unbeaten, and the defending champions set the early pace with eight wins from their opening nine Premier League matches.

That historic run was finally ended at 49 matches, when they were downed 2-0 at Old Trafford. Ruud van Nistelrooy atoned for his penalty miss in the same fixture during the 2003/04 season with a successful spot-kick, and Rooney wrapped up the match in added time.

Chelsea pounced and went top of the table with a 1-0 victory over Everton on 6 November. The loss did not deter the Toffees, however, who moved up to second place following a Merseyside derby victory over Liverpool the following month after an impressive start under manager David Moyes. Even though Arsenal beat north London rivals Tottenham Hotspur 5-4 the following week, they could not wrestle back the league lead as Chelsea went from strength to strength.

Table-topping Chelsea, whose only defeat of the Premier League campaign came away at Manchester City in October, had a five-point lead by Christmas and then went on a run of eight consecutive victories to surge 11 points clear at the start of February.

Goalkeeper Cech kept clean sheets in all of those matches and a decisive penalty save in the last of those victories at Blackburn Rovers helped him beat Peter Schmeichel's Premier League record of 694 minutes without conceding a goal.

Chelsea maintained their relentless form for the rest of the season and sealed their first Premier League title when Player of the Season Frank Lampard's double sealed a 2-0 win at Bolton Wanderers. Premier League records tumbled as they conceded the fewest goals in a season (15), registered the most wins (29) and Cech kept the most clean sheets (24).

Arsenal finished six points above Man Utd in second, despite John O’Shea's deft chip sealing a 4-2 win for the Red Devils at Highbury, and fourth place was taken by Everton for the first time in the Premier League. Moyes' side also boasted the youngest goalscorer in the competition's history after 16-year-old James Vaughan found the net in a 4-0 win over Crystal Palace in April.

Both Merseyside clubs secured UEFA Champions League football, though, as Liverpool won the competition in May 2005 to gain a spot as the holders. Inspired by Steven Gerrard, the Reds fought back from 3-0 down against AC Milan in the final to draw 3-3 and triumph in a penalty shoot-out.

While Chelsea dominated at the top of the table, an intriguing battle took place at the bottom, culminating in four teams competing to avoid all three relegation spots on the final day. Newly promoted trio of Norwich City, Crystal Palace and West Bromwich Albion were joined in the relegation fight by Southampton, who were looking to preserve their Premier League status after 27 years in the top-flight.

After one win in their first 16 matches under the guidance of Paul Sturrock and then Steve Wigley, Saints turned to Harry Redknapp as manager, who had just left arch rivals Portsmouth, in December. A last-gasp 4-3 win over Norwich City kept their hopes alive going into the final day, and just two points separated 17th-placed Norwich and West Brom at the foot of the division.

In the season finale, a 6-0 defeat by Fulham left Norwich's destiny out of their own hands and Southampton's relegation was confirmed in the second half when goals by Darren Fletcher and Van Nistelrooy gave Man Utd a 2-1 win at St Mary's Stadium.

Charlton Athletic went ahead against Crystal Palace, while West Brom moved out of the drop zone thanks to goals by Geoff Horsfield and Kieran Richardson against Portsmouth. Palace strikers Dougie Freedman and Andrew Johnson, who was the top English scorer in the Premier League with 21 goals, gave the Eagles hope, only for a late Charlton leveller from Jonathan Fortune to condemn Palace. West Brom thus became the first club in Premier League history to stay up despite having been bottom at Christmas.