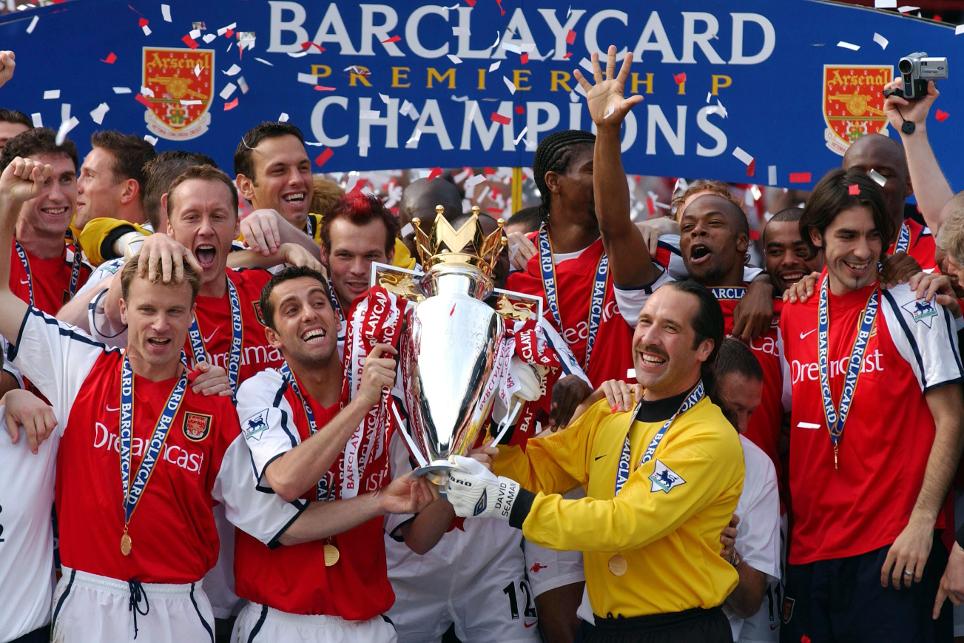 Four UEFA Champions League qualification places were up for grabs for the first time and Arsenal ended three seasons of dominance for Manchester United as they clinched the title in the defending champions' back yard with a 1-0 win at Old Trafford. The 2001/02 Premier League season saw plenty of change, and that all started with a host of big-name arrivals as a number of clubs looked to challenge for United's crown.

The summer of 2001 ushered in the start of Frank Lampard's long association with Chelsea as the midfielder arrived from West Ham United, Premier League debutants Fulham made the surprise signing of Dutch goalkeeper Edwin van der Sar from Juventus, and compatriot Ruud van Nistelrooy arrived at Manchester United.

Dean Richards filled Campbell's boots after joining from Southampton, who moved into their new home St Mary's Stadium after leaving The Dell. The centre-back's debut came against Manchester United, and he scored the opening goal as Spurs raced into a 3-0 lead at half-time. Sir Alex Ferguson's side came out firing in the second half, however, and emphatic finishes from Juan Sebastian Veron and David Beckham crowned a remarkable comeback for the visitors as the match finished 5-3 to United.

The previous season's UEFA Champions League semi-finalists Leeds United, with former Inter Milan striker Robbie Keane in their ranks, were the early pace-setters and topped the pile at the start of November after an 11-match unbeaten run. Liverpool and Aston Villa were their nearest rivals at this stage, and Villa's Peter Schmeichel became the first goalkeeper to score in the Premier League after striking late in a 2-1 defeat to Everton.

Liverpool then led the way soon after and two of the sides they beat in that fine early season run, Arsenal and Manchester United, met at Highbury in November. It was the hosts who came out on top as two late errors from United goalkeeper Fabian Barthez allowed Thierry Henry to score twice as the Gunners won 3-1.

Arsenal were soon on the receiving end of a home defeat to Sir Bobby Robson's Newcastle United, and the Magpies topped the table at Christmas. Newcastle striker Alan Shearer, who would go on to become the first player to score 200 Premier League goals when he struck against Charlton Athletic, found the net 23 times during the campaign, but Arsenal followed that reverse with an irresistible run of form.

Newcastle, Man Utd, Leeds and Liverpool all challenged Arsenal in the winter months, but the Gunners would not lose again in the Premier League campaign. They finished off the season with a 13-match winning streak that started with a 1-0 triumph at Everton. David Moyes replaced Walter Smith as manager when the Toffees were level on points with the relegation zone, but four wins from nine ensured they comfortably preserved their top-flight status.

Arsenal's form was epitomised by Dennis Bergkamp's clever touch around Newcastle defender Nikos Dabizas and cool finish in a 1-0 win at St James' Park, which was voted as goal of the season. FWA Player of the Year Robert Pires also produced a moment of inspiration in the same month, as he nonchalantly lobbed Schmeichel in the Gunners' 2-1 win at Villa Park.

To have any hopes of retaining their crown, Manchester United had to beat Arsenal at Old Trafford in the penultimate match of the season, but Sylvain Wiltord's winner sealed a second Premier League title for Arsene Wenger's side. They finished seven points clear of second-placed Liverpool, who sneaked ahead of United on the final day.

Long-serving Arsenal defenders Tony Adams and Lee Dixon retired after playing their part in the club's title triumph, and they lifted silverware once more when brilliant strikes from Ray Parlour and Player of the Season Freddie Ljungberg gave the Gunners a 2-0 victory over Chelsea in the FA Cup final.

Arsene Wenger unsurprisingly claimed the Manager of the Season award but previous winner George Burley endured a drastic change in fortunes as his Ipswich Town side, who had finished fifth in a remarkable 2000/01 campaign as a newly promoted club, were relegated.

Ipswich, who were playing in the UEFA Cup, won just one of their first 17 matches. Seven wins from their next eight looked to have dragged them away from trouble, but one win from their final 17 matches meant they went down. Their fate was confirmed when Liverpool thrashed them 5-0 on the final day, while Sunderland got the point they needed to secure safety against already relegated Derby County.

Leicester City joined Ipswich and Derby in the drop zone, in the same season that they moved out of their 111-year-old Filbert Street Stadium. For the first time in Premier League history, all three promoted teams – Blackburn Rovers, Bolton Wanderers and Fulham - stayed up.