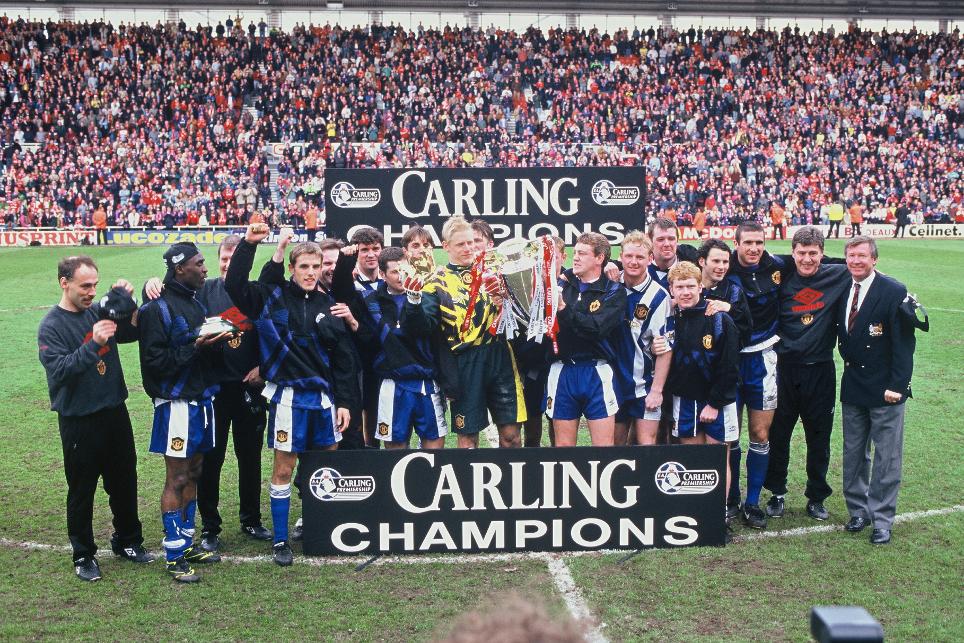 After relinquishing the Premier League title for the first time in 1994/95 to Blackburn Rovers, Manchester United surprised many by selling established first-team trio Paul Ince, Andrei Kanchelskis and Mark Hughes without bringing in any major additions. But Sir Alex Ferguson threw a host of academy stars into the fold and they recovered from being 12 points behind pacesetters Newcastle United to clinch their third PL crown, in a league that was reduced to 20 teams for the first time.

Former Liverpool defender Alan Hansen said "you can't win anything with kids" on BBC's Match of the Day after Man Utd suffered a 3-1 opening day loss at Aston Villa, but David Beckham, who scored the spectacular consolation at Villa Park, Paul Scholes, Gary and Phil Neville, and Nicky Butt joined another of 'Fergie's Fledglings', Ryan Giggs, as first-team regulars, and they would enjoy a long and successful dynasty at the core of the Old Trafford club.

Man Utd won their next five matches to move up to second, including a triumph at defending champions Blackburn, who finished seventh as they struggled to replicate their form from the previous term. This was despite Alan Shearer scoring 31 goals, a record that has yet to be surpassed in a 38-match Premier League season.

On 1 October, Man Utd's Eric Cantona returned from a nine-month ban to score in a 2-2 draw with Liverpool, but it was Kevin Keegan's Newcastle side who were the clear front-runners.

Former Queens Park Rangers striker Les Ferdinand and French winger David Ginola made an instant impact after their summer moves to St James' Park as the Magpies won nine of their opening 10 matches to go top, and they only lost once before their 1-0 defeat at Chelsea in early December.

While Man Utd were chasing Newcastle at the top, Netherlands forward Dennis Bergkamp got off the mark following his summer move to Arsenal with a spectacular double against Southampton. Elsewhere, promoted Middlesbrough signed Brazilian playmaker Juninho and Stan Collymore was finding his feet at Liverpool after firing Nottingham Forest to third position the previous campaign.

But Collymore could only look on as Ghanaian striker Tony Yeboah crashed in a ferocious volley off the underside of the crossbar in a 1-0 win for Leeds United against Liverpool in August, and Yeboah eclipsed his spectacular strike with the BBC Match of the Day Goal of the Season the following month, when he unleashed an unstoppable half-volley at Wimbledon.

The first meeting between leaders Newcastle and nearest challengers Man Utd came on 27 December at Old Trafford, with Ferguson's side coming out on top thanks to goals by Cantona and former Magpies striker Andrew Cole. Five successive victories followed for Newcastle and they were 12 points clear at one stage, but a slump of four defeats in six matches, including a narrow loss at home to Man Utd, took the Red Devils top. The Magpies spent 212 days at the summit, the most in Premier League history for a side not crowned as champions.

That run finished with a pulsating match against Liverpool at Anfield on 3 April. Keegan's charges went 3-2 ahead just before the hour mark, with February recruit Faustino Asprilla scoring a superb lob, but two late Collymore goals, including one in stoppage time, clinched victory for the Reds. That left Man Utd three points clear, although Newcastle had one match in hand, and a 3-2 victory at rivals Manchester City strengthened their hold on top spot the following Saturday.

A 3-1 loss at Southampton, where they changed from their grey strip to a blue and white kit at half time after they went 3-0 down, was the only time Man Utd dropped points for the rest of the season. After winning 1-0 at Leeds, Keegan said, "I would love it if we beat them" in a passionate and defiant post-match interview in defence of his side's title ambitions, but Ian Woan spectacularly levelled in Nottingham Forest's 1-1 draw with Newcastle the following match, and Man Utd won the league by a margin of four points.

The Red Devils also won the FA Cup final against Liverpool, who finished seven points behind Newcastle in third. League Cup winners Aston Villa qualified for Europe after finishing fourth. The relegation battle went down to the wire, with Southampton, Coventry City and Manchester City all level on points going into the final day, competing to avoid joining already relegated Bolton Wanderers and QPR.

Man City eventually went down on goal difference. Needing to better goalless draws for Southampton and Coventry, City rallied from 2-0 down against Liverpool to level at 2-2 with 12 minutes left but they did not realise they needed a winner and ran down the clock. Their home encounter with Saints in March did bring a highlight for the Citizens though, as Georgi Kinkladze went on a mazy run before deftly chipping in one of the goals of the season.